The Pilgrims of Hope Sented by Emma 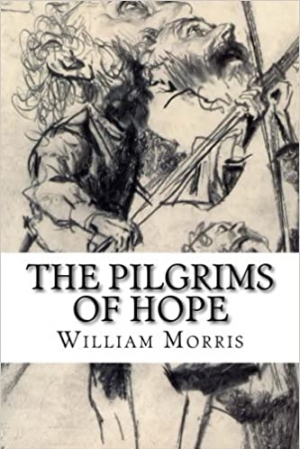 William Morris (24 March 1834 – 3 October 1896) was an English textile designer, poet, novelist, translator, and socialist activist. Associated with the British Arts and Crafts Movement, he was a major contributor to the revival of traditional British textile arts and methods of production. His literary contributions helped to establish the modern fantasy genre, while he played a significant role in propagating the early socialist movement in Britain. Morris is recognised as one of the most significant cultural figures of Victorian Britain; though best known in his lifetime as a poet, he posthumously became better known for his designs. Early fantasy writers like Lord Dunsany, E. R. Eddison and James Branch Cabell were familiar with Morris’s romances. The Wood Beyond the World is considered to have heavily influenced C. S. Lewis’ Narnia series, while J. R. R. Tolkien was inspired by Morris’s reconstructions of early Germanic life in The House of the Wolfings and The Roots of the Mountains. The young Tolkien attempted a retelling of the story of Kullervo from the Kalevala in the style of The House of the Wolfings; Tolkien considered much of his literary work to have been inspired by an early reading of Morris, even suggesting that he was unable to better Morris’s work; the names of characters such as ”Gandolf” and the horse Silverfax appear in The Well at the World’s End.

The Bride of Dreams

The King of the Golden River or the Black Brothers

The King of Ireland's Son

The Slayer of Souls

The Forest Monster of Oz

The People of the Mist