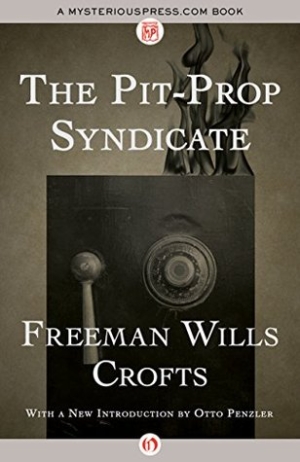 Another brilliantly ingenious detective story by the author of The Ponson Case. The mystery of the real business of the syndicate utterly baffled the clever young "amateurs" who tried to solve it, and it took all the experience and perseverance of the "professionals" to break up the dangerous and murderous gang.
Download book (pdf - 1.16 MB)
This link for educational purpose only. Please remove file from your computer after familiarization.

Stranded on a French highway, a wine merchant discovers a conspiracy

Twenty-six kilometers from Bordeaux, Seymour Merriman’s motorcycle runs low on gas. He is waiting for a passing motorist to come to his rescue when he notices a lorry turn down a nearby country road. Following it leads him to a mill, where an English firm manufactures pit-props for coal mines. They give him two liters of petrol and send him on his way, but not before he sees something odd. The lorry he saw on the road was marked No. 4, but it has been changed to No. 3—a peculiar incident that will lead Merriman into the greatest danger he has ever known.

With the help of a customs officer, Merriman looks into the mill’s business, and discovers that nothing about the little English firm is as it seems. All he wanted was a few liters of petrol, but he has stumbled across the century’s most fiendish crime.

This ebook features a new introduction by Otto Penzler and has been professionally proofread to ensure accuracy and readability on all devices.

A Pirate of the Caribbees

The Son of the Wolf