The Political Economy of Democracy Sented by Musa 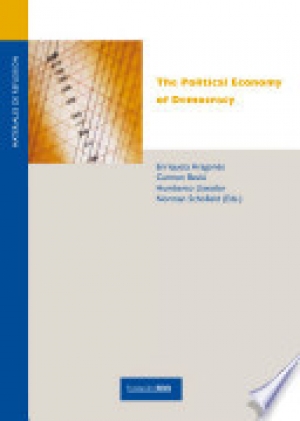 The Political Economy of Democracy

There are reasons to think that a fourth wave of democratization is coming. There are now more democracies on earth than ever before. Since 1991, not fewer than 40 governments have undertaken the transition to democracy.
Download book (pdf - 2.61 MB)
This link for educational purpose only. Please remove file from your computer after familiarization.

There are reasons to think that a fourth wave of democratization is coming. There are now more democracies on earth than ever before. Since 1991, not fewer than 40 governments have undertaken the transition to democracy. All these newly democratizing nations and redemocratizing nations, as well as the efforts to create suprastate constitutions, specially that of the European Union, have made more relevant and necessary than ever to understand legislative procedures and alternative political constitutions. The historical formal split into the distinct studies of political sciences biased the way economists and political scientists approached many questions and placed artificial constraints on the study of many important social issues. Thus, the importance of a unified study of political economy that explores the frontiers of the interaction between politics and economics has become nowadays an unavoidable necessity. The characterization of political economy as a synthesis of fields will provide sparks and an exciting research agenda for enlightening our understanding of democracies. The workshop on 'The Political Economy of Democracy', held in Barcelona on 5-7 June 2008 under the sponsorship of the Fundación BBVA, brought together intellectual leaders from economics and political science to obtain a balanced understanding of common topics of analysis, such as pre-electoral maneuvering, elections, coalition building and governance, within a single comprehensive framework. Particular attention was devoted to fields of active development such as endogenous entry of candidates, politicians and voters behavior, negotiations and agreements, and political regimes

Systems of Survival: A Dialogue on the Moral Foundations of Commerce and Politics

Golem: Modern Wars and Their Monsters

Mutative Media: Communication Technologies and Power Relations in the Past, Present, and Futures (Lecture Notes in Social Networks)

Clarence Thomas and the Lost Constitution

The Oxford Handbook of Political Institutions

Against the Death Penalty

The Truth Matters: A Citizen's Guide to Separating Facts from Lies and Stopping Fake News in Its Tracks