The Rayner-Slade Amalgamation Sented by Cameron 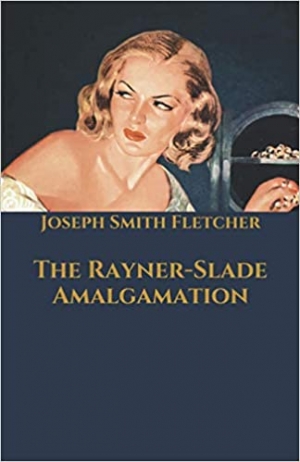 About eleven o'clock on the night of Monday, May 12, 1914, Marshall Allerdyke, a bachelor of forty, a man of great mental and physical activity, well known in Bradford as a highly successful manufacturer of dress goods, alighted at the Central Station in that city from an express which had just arrived from Manchester, where he had spent the day on business.
Download book (epub - 513.27 KB)
This link for educational purpose only. Please remove file from your computer after familiarization.

About eleven o'clock on the night of Monday, May 12, 1914, Marshall Allerdyke, a bachelor of forty, a man of great mental and physical activity, well known in Bradford as a highly successful manufacturer of dress goods, alighted at the Central Station in that city from an express which had just arrived from Manchester, where he had spent the day on business. He had scarcely set foot on the platform when he was confronted by his chauffeur, a young man in a neat dark-green livery, who took his master's travelling rug in one hand, while with the other he held out an envelope. "The housekeeper said I was to give you that as soon as you got in, sir," he announced. "There's a telegram in it that came at four o'clock this afternoon—she couldn't send it on, because she didn't know exactly where it would find you in Manchester." Allerdyke took the envelope, tore it open, drew out the telegram, and stepped beneath the nearest lamp. He muttered the wording of the message— "On board SS. Perisco "63 miles N.N.E. Spurn Point, 2.15 p.m., May 12_th_. "Expect to reach Hull this evening, and shall stop Station Hotel there for night on way to London. Will you come on at once and meet me? Want to see you on most important business— "JAMES." Allerdyke re-read this message, quietly and methodically folded it up, slipped it into his pocket, and with a swift glance at the station clock turned to his chauffeur. Gaffney," he said, "how long would it take us to run across to Hull?" The chauffeur showed no surprise at this question; he had served Allerdyke for three years, and was well accustomed to his ways. "Hull?" he replied. "Let's see, sir—that 'ud be by way of Leeds, Selby, and Howden. About sixty miles in a straight line, but there's a good bit of in-and-out work after you get past Selby, sir. I should say about four hours." "Plenty of petrol in the car?" asked Allerdyke, turning down the platform. "There is? What time did you have your supper?" "Ten o'clock, sir," answered Gaffney, with promptitude. "Bring the car round to the hotel door in the station yard," commanded Allerdyke. "You'll find a couple of Thermos flasks in the locker—bring them into the hotel lounge bar." The chauffeur went off down the platform. Allerdyke turned up the covered way to the Great Northern Hotel. When the chauffeur joined him there a few minutes later he was giving orders for a supply of freshly-cut beef sandwiches and hard-boiled eggs; the Thermos flasks he handed over to be filled with hot coffee.

Warrior of the Dawn

The Nightingale and the Rose

The Lady and the Pirate