The Son of Tarzan Sented by Musa 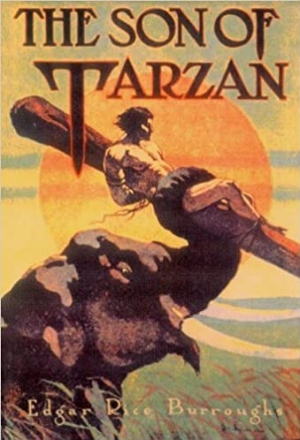 The fourth story of Tarzan's adventures.
Download book (pdf - 1.07 MB)
This link for educational purpose only. Please remove file from your computer after familiarization.

The fourth story of Tarzan's adventures.

Paulvitch still lived and sought vengeance against Tarzan. As part of his plot, he lured Tarzan's young son away from London. But the boy escaped, with the aid of the great ape Akut. Together they fled to the savage African jungles where Tarzan had been reared. There the civilized boy had to learn to meet the great beasts. He also had to face and conquer the same dangers his father had conquered. But he grew in time to be Korak the Killer, a warrior almost as mighty as Tarzan. Korak found a friend in Meriem, whom he rescued from a raiding Arab band. Then he discovered that the dangers of the jungle were nothing compared to the dangers devised by men.

The Napoleon of Notting Hill

The Wonderful Adventures of Nils

The Slave of the Lamp