The Story of Sigurd the Volsung Sented by Steve Bark 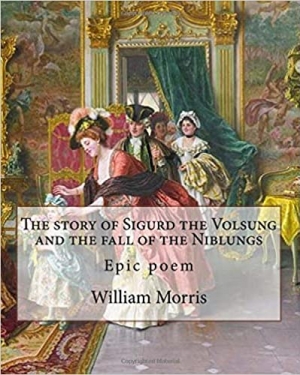 The Story of Sigurd the Volsung and the Fall of the Niblungs (1876) is an epic poem of over 10,000 lines by William Morris that tells the tragic story, drawn from the Volsunga Saga and the Elder Edda, of the Norse hero Sigmund, his son Sigurd (the equivalent of Siegfried in the Nibelungenlied and Wagner's Ring of the Nibelung[1][2]) and Sigurd's wife Gudrun
Download book (pdf - 696.34 KB)
This link for educational purpose only. Please remove file from your computer after familiarization.

The Story of Sigurd the Volsung and the Fall of the Niblungs (1876) is an epic poem of over 10,000 lines by William Morris that tells the tragic story, drawn from the Volsunga Saga and the Elder Edda, of the Norse hero Sigmund, his son Sigurd (the equivalent of Siegfried in the Nibelungenlied and Wagner's Ring of the Nibelung[1][2]) and Sigurd's wife Gudrun. It sprang from a fascination with the Volsung legend that extended back twenty years to the author's youth, and had already resulted in several other literary and scholarly treatments of the story. It was Morris's own favorite of his poems, and was enthusiastically praised both by contemporary critics and by such figures as T. E. Lawrence and George Bernard Shaw.[3][4][5] In recent years it has been rated very highly by many William Morris scholars, but has never succeeded in finding a wide readership on account of its great length and archaic diction.[6] It has been seen as an influence on such fantasy writers as Andrew Lang and J. R. R. Tolkien.[7][8] The Story of Sigurd is available in modern reprints, both in its original form and in a cut-down version, but there is no critical edition. Synopsis Book I: Sigmund The poem opens with the marriage of king Volsung's daughter Signy to Siggeir, king of the Goths. The bridal feast is interrupted by the arrival of a stranger, the god Odin in disguise, who drives a sword into a tree-trunk. Though everyone tries to draw the sword, Volsung's son Sigmund is the only man who can do it. The disappointed Siggeir takes his new wife home, inviting Volsung to visit him. When Volsung does so he is killed by Siggeir, and his sons are taken prisoner. While in captivity they are all killed by a wolf, apart from Sigmund who escapes into the forest. Signy sends Sigmund her two sons to help him in avenging their family, but Sigmund only accepts Sinfjotli, the hardier of the two. Sigmund and Sinfjotli kill Siggeir and burn down his hall, then return to their ancestral home, the hall of the Volsungs. Sigmund marries Borghild, while Sinfjotli goes abroad with Borghild's brother, quarrels with him, and kills him. On his return Sinfjotli is poisoned by Borghild, and she is turned out by Sigmund, who instead marries Hiordis. Sigmund is killed in battle, and the pregnant Hiordis is taken to live in the hall of King Elf in Denmark. Book II: Regin There she gives birth to Sigurd. Sigurd is raised by Regin, a cunning old man, and when he grows to manhood he asks for a horse from King Elf. Elf bids him choose the one he likes best, and Sigurd takes the best horse, and names it Grani. Sigurd is now urged by Regin to attack Fafnir, a dragon who guards a hoard of gold. This treasure is a curse to all who possess it. Fafnir, Regin says, was originally a human being; indeed, the dragon was Regin's brother and thus the gold rightfully belongs to Regin. ............ William Morris (24 March 1834 – 3 October 1896) was an English textile designer, poet, novelist, translator, and socialist activist. Associated with the British Arts and Crafts Movement, he was a major contributor to the revival of traditional British textile arts and methods of production. His literary contributions helped to establish the modern fantasy genre, while he played a significant role in propagating the early socialist movement in Britain. Born in Walthamstow, Essex, to a wealthy middle-class family, Morris came under the strong influence of medievalism while studying Classics at Oxford University, there joining the Birmingham Set. ....

The Eyes Have It

The Boy Who Knew What The Birds Said

White Lilac or the Queen of the May

The Fairy Tales of Charles Perrault