The Sword of Antietam Sented by Sarah Gerdes 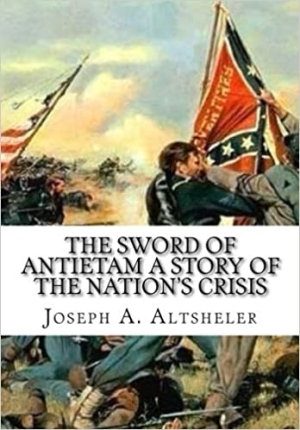 The Sword of Antietam

Joseph Alexander Altsheler (April 29, 1862 – June 5, 1919) was an American newspaper reporter, editor and author of popular juvenile historical fiction. He was a prolific writer, and produced fifty-one novels and (at least) fifty-one short stories. A Story of the Old New York Border. The Sword of Antietam, a story of the nation's crisis (1914) The Civil War Series Book #4 Two days after the battle of Antietam, Dick went with Colonel Winchester to Washington on official duty. His nerves, shaken so severely by that awful battle, were not yet fully restored and he was glad of the little respite, and change of scene. The sights of the city and the talk of men were a restorative to him. The capital was undoubtedly gay. The deep depression and fear that had hung over it a few weeks ago were gone. Men had believed after the Second Manassas that Lee might take Washington and this fear was not decreased when he passed into Maryland on what seemed to be an invasion. Many had begun to believe that he was invincible, that every Northern commander whoever he might be, would be beaten by him, but Antietam, although there were bitter complaints that Lee might have been destroyed instead of merely being checked, had changed a sky of steel into a sky of blue.

Under the Red Robe

The Coming of Cassidy

The People of the River