The Tarzan Twins Sented by Musa 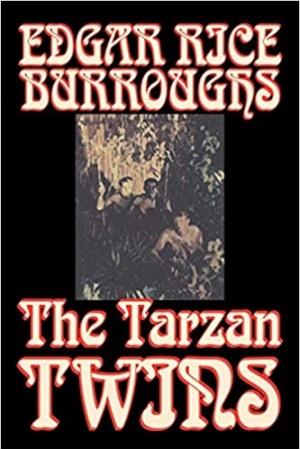 Two schoolboys, Dick and Doc, are cousins who resemble each other because their mothers are twins. As Dick is also related to Tarzan through his father, they become known as the Tarzan Twins. Invited to visit Tarzan's African estate, they become lost in the jungle and are imprisoned by cannibals, from whom they escape.
Download book (epub - 434.08 KB)
This link for educational purpose only. Please remove file from your computer after familiarization.

Two schoolboys, Dick and Doc, are cousins who resemble each other because their mothers are twins. As Dick is also related to Tarzan through his father, they become known as the Tarzan Twins. Invited to visit Tarzan's African estate, they become lost in the jungle and are imprisoned by cannibals, from whom they escape. They are then reunited with their host, who introduces them to his pet lion, Jad-bal-ja. Subsequently, they become involved in an adventure involving exiles from the lost city of Opar, who have kidnapped Gretchen von Harben, the daughter of a missionary. The Tarzan Twins, like all well-behaved twins, were born on the same day and, although they were not as "alike as two peas," still they resembled one another quite closely enough to fulfill that particular requirement of twinship; but even there they commenced breaking the rules that have been governing twins during the past several millions of years, for Dick had a shock of the blackest sort of black hair, while Doc's hair was the sunny hue of molasses candy. Their noses were alike, their blue eyes were alike; alike were their chins and their mouths. Perhaps Doc's eyes twinkled more and his mouth smiled more than Dick's for Dick did much of his twinkling and smiling inside and inside the boys were very much alike, indeed. It is simply staggering to discover what a boy can accomplish if he makes up his mind to it and so it was not long before Dick and Doc did excel in nearly all athletic sports and when it came to climbing trees -- well, Tarzan himself would have had no reason to be ashamed of them. Though their scholastic standing may have suffered a little in the following months of athletic effort, their muscles did not, and as vacation time approached, Dick and Doc had become as hard as nails and as active as a couple of manus, which you will know, if your education has not been neglected, is the ape-word for monkeys. Then it was that the big surprise came in a letter that Dick received from his mother. Tarzan of the Apes had invited them all to visit him and spend two months on his great African estate! The boys were so excited that they talked until three o'clock the next morning and flunked in all their classes that day.

A Journey to the West. Observations on the Chinese Migration to Italy

Two on the Trail

An Apache Princess: A Tale of the Indian Frontier

The Cruise of the Jasper B.

The Web of the Golden Spider