The Ten Books On Architecture: De architectura Sented by Musa 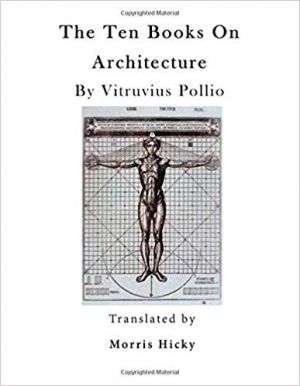 By Vitruvius Pollio Translated by Morris Hicky Morgan With Illustrations and Original Designs prepared under the Direction of Herbert Langford Warren And Nelson Robinson
Download book (pdf - 1.02 MB)
This link for educational purpose only. Please remove file from your computer after familiarization.

De architectura (English: On architecture, published as Ten Books on Architecture) is a treatise on architecture written by the Roman architect Marcus Vitruvius Pollio and dedicated to his patron, the emperor Caesar Augustus, as a guide for building projects. The work is one of the most important sources of modern knowledge of Roman building methods, as well as the planning and design of structures, both large (aqueducts, buildings, baths, harbours) and small (machines, measuring devices, instruments). It is also the prime source of the famous story of Archimedes and his bath-time discovery.

Vitruvius' work is one of many examples of Latin texts that owe their survival to the palace scriptorium of Charlemagne in the early 9th century. (This activity of finding and recopying classical manuscripts is part of what is called the Carolingian Renaissance.) Many of the surviving manuscripts of Vitruvius' work derive from an existing manuscript that was written there, British Library manuscript Harley 2767.

These texts were not just copied, but also known at the court of Charlemagne, since his historian, the bishop Einhard, asked for explanations of some technical terms at the visiting English churchman Alcuin. In addition, a number of individuals are known to have read the text or have been indirectly influenced by it, including: Vussin, Hrabanus Maurus, Hermann of Reichenau, Hugo of St. Victor, Gervase of Melkey, William of Malmesbury, Theoderich of St. Trond, Petrus Diaconus, Albertus Magnus, Filippo Villani, Jean de Montreuil, Petrarch, Boccaccio, Giovanni de Dondi, Domenico di Bandino, Niccolo Acciaioli bequeathed copy to the Basilica of San Lorenzo, Florence, Bernward of Hildesheim, and St. Thomas Aquinas. In 1244 the Dominican friar Vincent of Beauvais made a large number of references to De architectura in his compendium of all the knowledge of the Middle Ages "Speculum maius".

Murder in the Crooked House

Rethinking Design and Interiors: Human Beings in the Built Environment

The Handbook of Narrative Analysis

A Basic Theory of Everything

The Cambridge Dictionary of Christian Theology

Amigurumi Parent and Baby Animals: Crochet soft and snuggly moms and dads with the cutest babies!

The Bible in Shakespeare

The Journal I Did Not Keep: New and Selected Writing

A Restless Embrace of the Past?
Book Detail
Category Author
Latest Downloads