The Thing in the Attic Sented by Rebecca 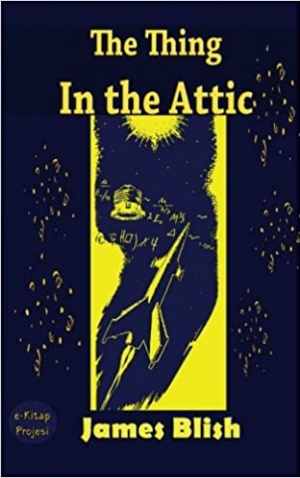 Suddenly, Honath lost his temper. "Lose it, then!" he shouted. "Let us unlearn everything we know only by rote, go back to the beginning, learn all over again, and continue to learn, from our own experience. Spokesman, you are an old man, but there are still some of us who haven't forgotten what curiosity means!
Download book (epub - 208.81 KB)
This link for educational purpose only. Please remove file from your computer after familiarization.

Suddenly, Honath lost his temper. "Lose it, then!" he shouted. "Let us unlearn everything we know only by rote, go back to the beginning, learn all over again, and continue to learn, from our own experience. Spokesman, you are an old man, but there are still some of us who haven't forgotten what curiosity means!" "Quiet!" the Spokesman said. "We have heard enough. We call on Alaskon the Navigator." "Much of the Book is clearly untrue," Alaskon said flatly, rising. "As a handbook of small trades it has served us well. As a guide to how the universe is made, it is nonsense, in my opinion; Honath is too kind to it. I've made no secret of what I think, and I still think it." "And will pay for it," the Spokesman said, blinking slowly down at Alaskon. "Charl the Reader." "Nothing," Charl said, without standing, or even looking up. "You do not deny the charges?" "I've nothing to say," Charl said, but then, abruptly, his head jerked up, and he glared with desperate eyes at the Spokesman. "I can read, Spokesman. I have seen words in the Book of Laws that contradict each other. I've pointed them out. They're facts, they exist on the pages. I've taught nothing, told no lies, preached no unbelief. I've pointed to the facts. That's all." "Seth the Needlesmith, you may speak now." The guards took their hands gratefully off Seth's mouth; they had been bitten several times in the process of keeping him quiet up to now. Seth resumed shouting at once. "I'm no part of this group! I'm the victim of gossip, envious neighbors, smiths jealous of my skill and my custom! No man can say worse of me than that I sold needles to this pursemaker—sold them in good faith! The charges against me are lies, all lies!" Honath jumped to his feet in fury, and then sat down again, choking back the answering shout almost without tasting its bitterness. What did it matter? Why should he bear witness against the young man? It would not help the others, and if Seth wanted to lie his way out of Hell, he might as well be given the chance. The Spokesman was looking down at Seth with the identical expression of outraged disbelief which he had first bent upon Honath. "Who was it cut the blasphemies into the hardwood tree, by the house of Hosi the Lawgiver?" he demanded. "Sharp needles were at work there, and there are witnesses to say that your hands held them." "More lies!"

The Rainbow by David Herbert Lawrence

Race to the Kill

Odd and the Frost Giants Sented by Luis

The Wellness Sense: A practical guide to your physical and emotional health based on Ayurvedic and yogic wisdom Sented by Musa