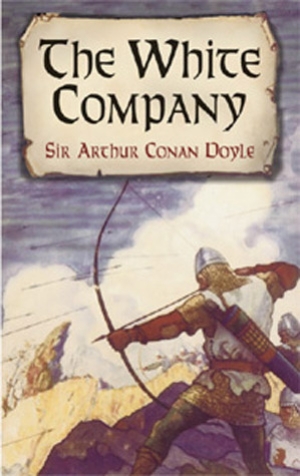 An historical adventure set during the Hundred Years War.
Download book (pdf - 1.61 MB)
This link for educational purpose only. Please remove file from your computer after familiarization.

"Now order the ranks, and fling wide the banners, for our souls are God's and our bodies the king's, and our swords for Saint George and for England!" With that rousing proclamation, twelve hundred knights ride into battle, accompanied by the stalwart archers known as the White Company.
Fueled by their appetite for glory, this motley crew of freebooters stands united in their unswerving devotion to the company commander, Sir Nigel Loring. Short, bald, and extremely nearsighted, Sir Nigel's unprepossessing appearance belies his warrior's heart and his chivalrous nature. The rollicking adventures of his company during the Hundred Years War center around Sir Nigel's loyal squire, Alleyne Edricson. Raised in the sheltered confines of a monastery, young Alleyne comes of age amid the rough-and-tumble of armed conflict and the bewildering ways of courtly love.
Best known as the creator of Sherlock Holmes, Sir Arthur Conan Doyle was also a passionate historian. The White Company was his favorite among his own works; here, he offers flavorful, realistic depictions of life during the 14th century — from its weapons and apparel to its religious practice, and the close connection between the cycles of human existence, and the rhythm of the seasons. Readers of all ages will thrill to this spirited tale and its evocative portrait of the Middle Ages.

The Law and the Lady

Learning AngularJS: A Guide to AngularJS Development Sented by Shon