Through the Air to the North Pole Sented by Jacob 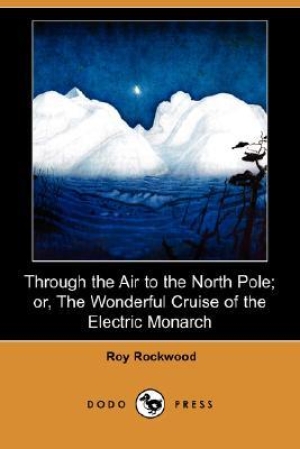 Orphans Mark and Jack are fostered by Professor Henderson, with help from the professor's assistant Washington White and his friend Andy Sudds, the big game hunter. In their first adventures the Professor builds a unique boat/dirigible called the Monarch, which they use to visit the North Pole.
Download book (pdf - 651.92 KB)
This link for educational purpose only. Please remove file from your computer after familiarization.

Roy Rockwood was a house pseudonym used by the Stratemeyer Syndicate for boy's adventure books. The name is mostly well-remembered for the Bomba, the Jungle Boy (1926-1937) and Great Marvel series (1906- 1935). The Stratemeyer Syndicate was the producer of a number of series for children and adults including the Nancy Drew mysteries, the Hardy Boys, and others. The Stratemeyer Syndicate was the creation of Edward Stratemeyer, whose ambition was to be a writer a la Horatio Alger. He succeeded in this ambition (eventually even writing eleven books under the pseudonym "Horatio Alger"), turning out inspirational, up-by-the-bootstraps tales. In Stratemeyer's view, it was not the promise of sex or violence that made such reading attractive to boys; it was the thrill of feeling "grown-up" and the desire for a series of stories, an "I want some more" syndrome. Works written under that name include: Five Thousand Miles Underground; or, The Mystery of the Centre of the Earth (1908), Jack North's Treasure Hunt; or, Daring Adventures in South America (1907) and Lost on the Moon; or, In Quest of the Field of Diamonds (1911).

The Last of the Legions

Otto of the Silver Hand

The Heritage of the Desert

The Bradys and the Girl Smuggler

A Pirate of the Caribbees