Ticket No. 9672 Sented by Sarah Gerdes 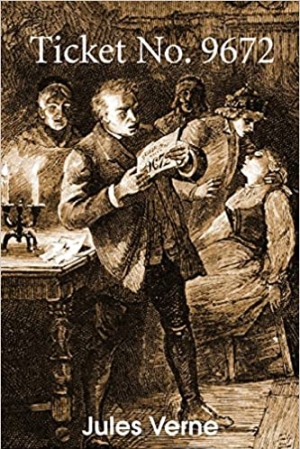 Jules Verne's Ticket No. 9672 is a tale of two women, Dame Hansen is a "foolish creature" whose mistakes must be dealt with by her daughter Hulda.
Download book (pdf - 748.39 KB)
This link for educational purpose only. Please remove file from your computer after familiarization.

Jules Verne's Ticket No. 9672 is a tale of two women, Dame Hansen is a "foolish creature" whose mistakes must be dealt with by her daughter Hulda. Ole Kemp, cousin and betrothed of Hulda and best friend of Joel, has embarked on the vessel Viking. His return is anxiously awaited, but what returns instead is a lottery ticket. Jules Gabriel Verne was a French novelist, poet, and playwright best known for his adventure novels and his profound influence on the literary genre of science fiction. He was trained to follow in his father's footsteps as a lawyer, but quit the profession early to write for magazines and the stage. His collaboration with the publisher Pierre-Jules Hetzel led to the creation of the Voyages Extraordinaires, a widely popular series of scrupulously researched adventure novels including A Journey to the Interior of the Earth, Twenty Thousand Leagues Under the Sea, and Around the World in Eighty Days.

AngularJS: Up and Running Sented by Shon

C plus plus Primer, 5th Edition Sented by Shon