To The Last Man Sented by Jacob 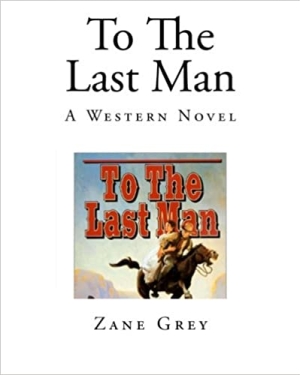 To The Last Man

An ancient feud between two frontier families is inflamed when one of the families takes up cattle rustling. In the grip of their relentless code of loyalty, they fight a war in Tonto Basin, desperately, doggedly, neither side seeing the futility of the conflict. Surrounded by this volatile environment, young Jean finds himself hopelessly in love with a girl from whom he is separated by an impassable barrier.
Download book (pdf - 1.07 MB)
This link for educational purpose only. Please remove file from your computer after familiarization.

To The Last Man by Zane Grey - To the Last Man: A Story of the Pleasant Valley War is a western novel written by Zane Grey. To The Last Man is a shorter version of Tonto Basin. Grey submitted the manuscript of Tonto Basin to the magazine The Country Gentleman, which published it in serialization as To the Last Man from May 28, 1921 through July 30, 1921. This was a much shorter version of the original leaving out much of the backstory. This shorter version was published by Harper Brothers. It is a story of a family feud healed by young love. The story is based on a factual event involving the notorious Hashknife gang of Northern Arizona. The story follows an ancient feud between two frontier families that is inflamed when one of the families takes up cattle rustling. The ranchers are led by Jean Isbel and, on the other side, Lee Jorth and his band of cattle rustlers. In the grip of a relentless code of loyalty to their own people, they fight the war of the Tonto Basin, desperately, doggedly, to the last man, neither side seeing the futility of it until it is too late. And in this volatile environment, young Jean finds himself hopelessly in love with a girl from whom he is separated by an impassable barrier.

The One Way Trail

The Inn of the Two Witches

How the Two Ivans Quarrelled

Guilt of the Brass Thieves

Alfresco for Administrators Sented by Shon