Told in the East Sented by Jacob 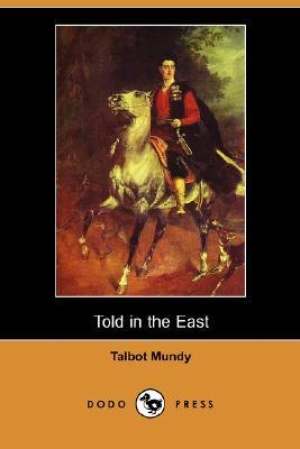 Talbot Mundy (born William Lancaster Gribbon) (1879-1940) was an English writer who wrote under the pseudonym Walter Galt. His most famous book is King of the Khyber Rifles:
Download book (pdf - 890.66 KB)
This link for educational purpose only. Please remove file from your computer after familiarization.

Talbot Mundy (born William Lancaster Gribbon) (1879-1940) was an English writer who wrote under the pseudonym Walter Galt. His most famous book is King of the Khyber Rifles: A Romance of Adventure (1916), which is set in India under British Occupation. He wrote many other books and stories, including Hira Singh: When India Came to Fight in Flanders (1918) and a number of stories about Tros of Samothrace, a Greek freedom fighter who aided Britons and Druids in their fight against Julius Caesar. In 1919, Mundy serialized On the Trail of Tippoo Tib, a novel about treasure hunting and ivory poaching in East Africa, which Mundy always claimed was the most autobiographical of his novels. His other works include Rung Ho! (1914), The Winds of the World (1915), The Ivory Trail (1919), Told in the East (1920), The Eye of Zeitoon (1920), The Guns of the Gods (1921), The Bubble Reputation (1923), Caves of Terror (1922), and The Lion of Petra (1922).

25 Years of Transformations of Higher Education Systems in Post-Soviet Countries: Reform and Continuity

The Romance of War Inventions

Outlaw Platoon_ Heroes, Renegades, Infidels, and the Brotherhood of War in Afghanistan

In the Mahdi's Grasp