Varney the Vampire Sented by Rebecca 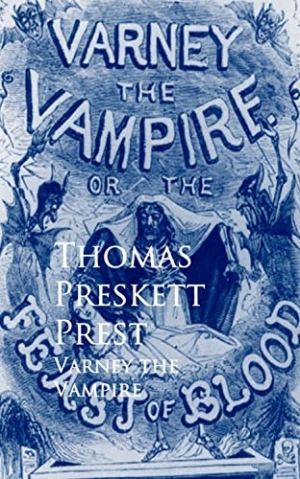 Set during the reign of King George II, this gruesome tale concerns the persecution of the Bannerworth family by Sir Francis Varney, a vampire who has developed the habit of creeping into the Bannerworth home and sucking the blood of their daughter, Flora. Varney is presented sympathetically, a victim of circumstances as he tries to save himself, and his victims, from such dreadful acts.
Download book (pdf - 3.40 MB)
This link for educational purpose only. Please remove file from your computer after familiarization.

The unprecedented success of the romance of "Varney the Vampyre," leaves the Author but little to say further, than that he accepts that success and its results as gratefully as it is possible for any one to do popular favours.

A belief in the existence of Vampyres first took its rise in Norway and Sweden, from whence it rapidly spread to more southern regions, taking a firm hold of the imaginations of the more credulous portion of mankind.

The following romance is collected from seemingly the most authentic sources, and the Author must leave the question of credibility entirely to his readers, not even thinking that he is peculiarly called upon to express his own opinion upon the subject.

Nothing has been omitted in the life of the unhappy Varney, which could tend to throw a light upon his most extraordinary career, and the fact of his death just as it is here related, made a great noise at the time through Europe and is to be found in the public prints for the year 1713.

With these few observations, the Author and Publisher, are well content to leave the work in the hands of a public, which has stamped it with an approbation far exceeding their most sanguine expectations, and which is calculated to act as the strongest possible incentive to the production of other works, which in a like, or perchance a still further degree may be deserving of public patronage and support.

To the whole of the Metropolitan Press for their laudatory notices, the Author is peculiarly obliged.

The Horror in the Museum