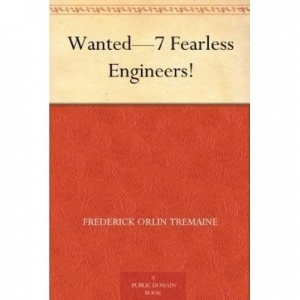 Wanted - 7 Fearless Engineers, written by the SF literature author Warner van Lorne, tells the story of Dick Burrows, an unemployed engineer who leaves the places where he spent all his live, embarking on an adventure far away, towards unexplored places.
Download book (epub - 206.48 KB)
This link for educational purpose only. Please remove file from your computer after familiarization.

Wanted - 7 Fearless Engineers, written by the SF literature author Warner van Lorne, tells the story of Dick Burrows, an unemployed engineer who leaves the places where he spent all his live, embarking on an adventure far away, towards unexplored places.

The action is set during the Great Depression, in an unnamed city, where the young Dick Burrows is, as many other men and women there, in a desperate search for a job. He sees an advert in a newspaper saying that a man skilled in operating big machineries is wanted for a job in a faraway place.

He decides to take his chances and goes to the interview, where the recruiter presents him the requirements for the position. Besides being willing to leave their native town and never return, candidates must also be married by the time they are effectively hired. This brings the protagonist to despair, because, although he fulfills all the other requirements, he does not have a wife.

However, when he expresses this concern, the recruiter mysteriously smiles, implying that he would surely find a girl ready to marry him and follow him wherever he is required to go. The two men say goodbye to each other, the recruiter telling Burrows that he and his wife are expected within five days, to sign the contract.

Optimistic, but still worried about the "wife" part of the deal, the protagonist sits at his table in a restaurant, when a young lady tumbles and falls in front of him. They fall in love and they get married just in time for leaving to the location of Dick's job.

Planet Jupiter is their final destination, Burrows and the other six engineers recruited by the same employer being responsible to start the first human colony there. Do the courageous members of the team complete their task and make the distant planet their new home or are they taken aback by homesickness and the difficulty of the challenges they face?