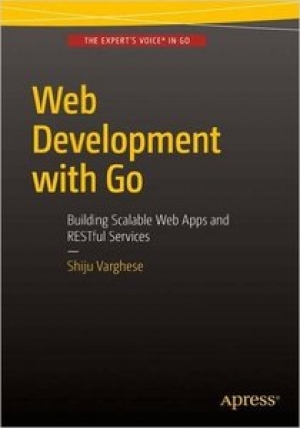 Web Development with Go will teach you how to develop scalable real-world web apps, RESTful services, and backend systems with Go. The book starts off by covering Go programming language fundamentals as a prerequisite for web development. After a thorough understanding of the basics, the book delves into web development using the built-in package, net/http. With each chapter you’ll be introduced to new concepts for gradually building a real-world web system.

The book further shows you how to integrate Go with other technologies. For example, it provides an overview of using MongoDB as a means of persistent storage, and providesan end-to-end REST API sample features MongoDB as well. Developers looking for a full-fledged web development framework for building web apps will be introduced to Beego. The book then moves on to demonstrate how to deploy web apps to the cloud using the Google Cloud platform. Finally, the book introduces Docker, a revolutionary container technology platform for deploying containerized Go web apps to the Cloud.

In totality, Go is a high-performance language while providing greater level of developer productivity, therefore Web Development with Go equips you with the necessary skills and knowledge required for effectively building robust and efficient web apps by leveraging the features of Go, and find yourself become the sought after person on Go among your peers and employers alike, in no time.