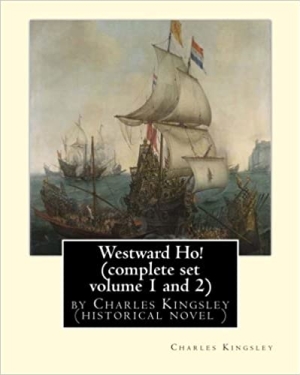 This is the best novel ever written on the greatest age of English adventure. It is a saga of the Devonshire sailors who, like Drake, sailed to the unknown to found an empire for their queen, "as good as any which his Majesty of Spain had." The story swings from start to close at a breathless pace.
Download book (pdf - 2.42 MB)
This link for educational purpose only. Please remove file from your computer after familiarization.

Westward Ho! is an 1855 British historical novel by Charles Kingsley.The novel was based on the adventures of Elizabethan corsair Amyas Preston (Amyas Leigh in the novel), who sets sail with Sir Francis Drake, Sir Walter Raleigh and other privateers to the New World, where they battle with the Spanish.Set initially in Bideford in North Devon during the reign of Elizabeth I, Westward Ho! follows the adventures of Amyas Leigh (Amyas Preston), an unruly child who as a young man follows Francis Drake to sea. Amyas loves local beauty Rose Salterne, as does nearly everyone else; much of the novel involves the kidnap of Rose by a Spaniard.Amyas spends time in the Caribbean sea and Venezuela seeking gold, and eventually returns to England at the time of the Spanish Armada, finding his true love, the beautiful Indian maiden Ayacanora, in the process; yet fate had blundered and brought misfortune into Amyas's life, for not only had he been blinded by a freak bolt of lightning at sea, but he also loses his brother Frank Leigh and Rose Salterne, who were caught by the Spaniards and burnt at the stake by the Inquisition.Westward Ho! is a historical novel which celebrates England's victories over Spain in the Elizabethan era. Although originally a political radical, Kingsley had by the 1850s become increasingly conservative and a strong supporter of British imperialism.The novel consistently emphasises the superiority of English mercantile values over those of the Spanish.Although originally written for adults, its mixture of patriotism, sentiment and romance deemed it suitable for children, and it became a firm favourite of children's literature.A prominent theme of the novel is the 16th-century fear of Catholic domination,and this reflects Kingsley's own dislike of Catholicism.The novel repeatedly shows the Protestant English correcting the worst excesses of the Spanish Jesuits and the Inquisition.[The novel's virulent anti-Catholicism, as well as its racist attitudes to native peoples, has made the novel less appealing to a modern audience, although it is still regarded by some as Kingsley's "liveliest, and most interesting novel."...... Charles Kingsley (12 June 1819 – 23 January 1875) was a broad church priest of the Church of England, a university professor, social reformer, historian and novelist. He is particularly associated with Christian socialism, the working men's college, and forming labour cooperatives that failed but led to the working reforms of the progressive era. He was a friend and correspondent with Charles Darwin.ingsley was born in Holne, Devon, the elder of two sons of the Reverend Charles Kingsley and his wife Mary Lucas Kingsley. His brother, Henry Kingsley, also became a novelist. He spent his childhood in Clovelly, Devon, where his father was Curate 1826–1832 and Rector 1832–1836,and at Barnack, Northamptonshire and was educated at Bristol Grammar School and Helston Grammar School before studying at King's College London, and the University of Cambridge. Charles entered Magdalene College, Cambridge, in 1838, and graduated in 1842. He chose to pursue a ministry in the church. From 1844, he was rector of Eversley in Hampshire. In 1859 he was appointed chaplain to Queen Victoria. In 1860, he was appointed Regius Professor of Modern History at the University of Cambridge.In 1861 he became a private tutor to the Prince of Wales.In 1869 Kingsley resigned his Cambridge professorship and, from 1870 to 1873, was a canon of Chester Cathedral. While in Chester he founded the Chester Society for Natural Science, Literature and Art, which played an important part in the establishment of the Grosvenor Museum.In 1872 he accepted the Presidency of the Birmingham and Midland Institute and became its 19th President. In 1873 he was made a canon of Westminster Abbey.Kingsley died in 1875 and was buried in St Mary's Churchyard in Eversley...........