When the World Shook Sented by Luis 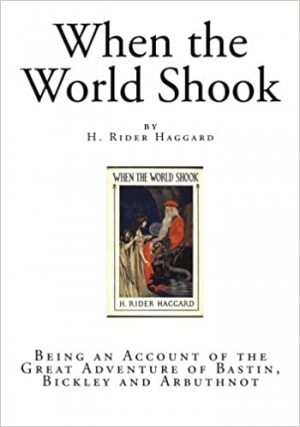 When the World Shook - Being an Account of the Great Adventure of Bastin, Bickley and Arbuthnot - by H. Rider Haggard. When the World Shook is a novel by H. Rider Haggard written in 1919. It deals with the adventures of Bastin, Bickley, and Arbuthnot as they travel to the south sea island of Orofenia.
Download book (epub - 313.34 KB)
This link for educational purpose only. Please remove file from your computer after familiarization.

When the World Shook - Being an Account of the Great Adventure of Bastin, Bickley and Arbuthnot - by H. Rider Haggard. When the World Shook is a novel by H. Rider Haggard written in 1919. It deals with the adventures of Bastin, Bickley, and Arbuthnot as they travel to the south sea island of Orofenia. The story begins as the main character, Humphrey Arbuthnot—a writer of adventure stories—is married to his wife Natalie. Shortly there after she claims that she is going to die soon even after she has been given a clean bill of health from their doctor, Bastin. Right as Natalie dies she tells Arbuthnot that shortly after she dies he'll want to travel somewhere and that is where the two shall meet again. She dies, and shortly there after Arbunoth has a sudden urge to travel to the Pacific islands. He gets on a ship with his doctor, Bastin, a priest, Bickley, and his dog, Toby. The ship is then taken by a cyclone after all the crew abandons ship save for the three adventurers. When they awake they find themselves shipwrecked on the south sea island of Orofena. Here they meet the Orofean people who worship a God called Oro, who is a war God. The men win the love of the Orofeans as Bastin teaches the men western medicine techniques and saves a few lives. They are told not to go to a part of the island named Oromatuas which is a volcano. After a dispute in which Bickley destroys a symbol of Oro and kills one of the natives who was about to be sacrificed. They run to Oromatuas where Toby, the dog, finds a secret passageway within the volcano. The men search the volcano and find two crystal coffins with two people in them. First they revive an old man who is the original Oro. Next they revive his daughter Yva. After being revived Oro looks at the stars to reveal he has been unconscious for 250,000 years as he can tell from star positions. Yva claims they know the position of the stars as they came from a society that was filled with wisdom known as the age of wisdom. To describe what the age of wisdom was like Yva shows the men by conjuring up scenes from the age of wisdom by showing the men hallucination of the past.

The Land of Mist

The Lust of Hate

The House Between Tides