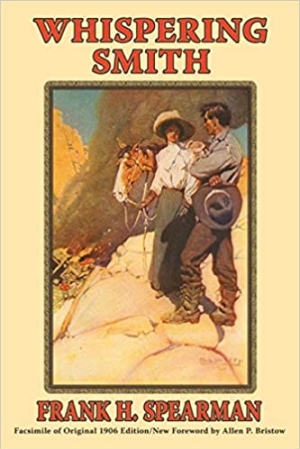 Whispering Smith is just a plain story. It is a book of incident instead of introspection. When you read it you don't give a hang about soul struggles.
Download book (pdf - 1.11 MB)
This link for educational purpose only. Please remove file from your computer after familiarization.

There were two Whispering Smiths, one the fictional railroad detective in Frank Hamilton Spearman's novel, and the other a historic westerner whose real name was James L. Smith. The fictional character was the hero in this best-selling novel of 1906, and the book's popularity made it the prototype for Western fiction.

Spearman became fascinated by railroad lore through his contacts with the Union Pacific while a Nebraska banker. He had previously authored several stories with railroad plots and by 1904 had his Strategy of Great Railroads adopted as a textbook at Yale University. Determined to write about railroad detectives Spearman visited Cheyenne, Wyoming, to interview two of the most famous, Timothy Keliher and Joe LeFors. Based on their stories and with a fascination for the nickname Whispering Smith, Spearman crafted his exciting novel. His heroic character was a composite of Keliher and LeFors and the adventures found in the novel had their source in the stories of these two railroad detectives.

Hollywood pounced on the long term success of the novel and its colorful title. Filming rights were obtained as early as 1916 and more than five motion pictures were made plus a television series in 1961. The most famous production was filmed in 1948. Alan Ladd starred in this Technicolor film and credited it with launching his career.

Frank Hamilton Spearman continued to write but none of his subsequent novels achieved the success of Whispering Smith. His later years were spent in Hollywood where he turned to writing screenplays. It will never be known if Spearman had any knowledge about James L. Smith, known as ''Whispering Smith'' in the West, nor is it known if that westerner knew of Spearman's novel although he was still alive when it was published.

The true story of James L. Smith is recounted in Whispering Smith: His Life and Misadventures by Allen P. Bristow from Sunstone Press.