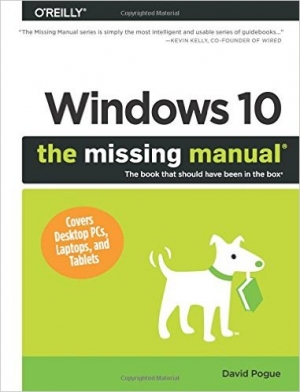 Windows 10: The Missing Manual
Download book (pdf - 25.73 MB)
This link for educational purpose only. Please remove file from your computer after familiarization.

With Windows 8, Microsoft completely reimagined the graphical user interface for its operating system, which now runs on both desktop PCs and tablets, but the overhaul was not without hitches and its dueling UIs (one designed for touch, the other for keyboards and mice) created significant confusion for users. Windows 10 (a free update to users of Windows 8 or Windows 7) fixes a number of the problems introduced by the revolution in Windows 8 and offers plenty of new features along, such as the new Spartan web browser, Cortana voice-activated “personal assistant,” new universal apps (that run on tablet, phone, and computer), and more. But to really get the most out of the new operating system, you’re going to need a guide.

Thankfully, Windows 10: The Missing Manual will be there to help. Like its predecessors, this book from the founder of Yahoo Tech, previous New York Times columnist, bestselling author, and Missing Manuals creator David Pogue illuminates its subject with technical insight, plenty of wit, and hardnosed objectivity for beginners, veteran standalone PC users, new tablet owners, and those who know their way around a network.

Beginning Windows 10: Do More With Your PC

Windows 7 Inside Out, Deluxe Edition

Windows Server 2012: Up and Running

Microsoft Windows XP Networking and Security Inside Out

Win10 Manual "How To" Procedures For Windows 10 Everyone Needs To Know: Anniversary Update