Women, Work and Colonialism in the Netherlands and Java Comparisons, Contrasts, and Connections, 1830-1940 Sented by Sarah Gerdes 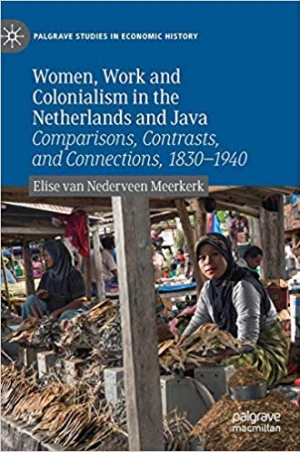 Women, Work and Colonialism in the Netherlands and Java Comparisons, Contrasts, and Connections, 1830-1940

'This book makes an important contribution to the history of household labour relations in two contrasting societies. It deserves a wide readership.'
Download book (pdf - 6.69 MB)
This link for educational purpose only. Please remove file from your computer after familiarization.

'This book makes an important contribution to the history of household labour relations in two contrasting societies. It deserves a wide readership.'
-Anne Booth, SOAS University of London, UK
'By exploring how colonialism affected women's work in the Dutch Empire this carefully researched book urges us to rethink the momentous implications of colonial exploitation on gender roles both in periphery and metropolis.'
-Ulbe Bosma, the Free University of Amsterdam, the Netherlands
'In this exciting and original book, Elise van Nederveen Meerkerk exposes how colonial connections helped determine the status and position of women in both the Netherlands and Java. The effects of these connections continue to shape women's lives in both colony and metropole today.'
-Jane Humphries, University of Oxford, UK
Recent postcolonial studies have stressed the importance of the mutual influences of colonialism on both colony and metropole. This book studies such colonial entanglements and their effects by focusing on developments in household labour in the Dutch Empire in the period 1830-1940. The changing role of households', and particularly women's, economic activities in the Netherlands and Java, one of the most important Dutch colonies, forms an excellent case study to help understand the connections and disparities between colony and metropole.
The author contends that colonial entanglements certainly existed, and influenced developments in women's economic role to an extent, both in Java and the Netherlands. However, during the nineteenth century, more and more distinctions in the visions and policies towards Dutch working class and Javanese peasant households emerged. Accordingly, a more sophisticated framework is needed to explain how and why such connections were - both intentionally and unintentionally - severed over time.

A Glance at Work